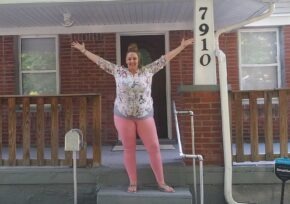 “If I could fix one thing right now, what would it be?”

Through the Family Self-Sufficiency program at West Central Community Action Agency, this question unlocks the door to a world of resources that families may never have dreamed they could access. In some cases, this question, along with support in the program for saving money, puts families on a game-changing path to home ownership.

Dawn Kopecky, a mother of six and a resident of Belton, in Cass County, Missouri, is a prime example. Hard work and guidance through this program helped her achieve what she thought was impossible, including a stable higher paying job and enough money to make a down payment on a house.

“I have been through a lot in these last years. In 2012 my then nine-year old daughter suddenly died of a brain aneurism. This really took a toll on me, and I went into a severe depression. In the next few years, one of my children had behavioral and mental health issues. I was almost to the point of giving up.”

In an effort to provide her family with a new start and atmosphere, Dawn moved in 2016 to the Belton area. She used rental support she receives through the federal Housing Choice Voucher program to secure an affordable place to live. She also enrolled in the associated Family Self Sufficiency program. West Central Missouri Community Action Agency operates the Housing Choice Voucher and Family Self Sufficieny programs in its nine-county region (Bates, Benton, Cass, Cedar, Henry, Hickory, Morgan, St. Clair, and Vernon counties).

Dawn’s decision paired her with Family Self Sufficiency field specialist LeAna Dehues. Life began to look up after that.

Dawn set goals through the program and set her heart to one day becoming a homeowner. She also worked her way through more disruption in her life, including being shot in 2017 by an ex-boyfriend. Dawn persevered. LeAna was there with her every step of the way.

“LeAna treated me as an equal and never looked down on me.,” Dawn said. “She would call and check on me, give me encouraging words, and answered all my many questions. It is because of this I kept on trying to do better.”

Dawn completed her resume, built positive relationships, improved her credit, and moved up at work. She also saved money through an escrow account that the program sets up for each participant. The agreement includes putting more money into the account when employment and income improve.

The potential to build up her savings inspired Dawn. “I decided I would try to get a better position at work with better pay, which put more monthly into my escrow account.”

After three and half years, all of Dawn’s hard work paid off. She was hired as a permanent manager and a month later was offered a temporary higher paying management job, which she still holds. She also improved her credit score through the program’s support with budgeting and a credit action plan.

Then, her dreams came true: She was approved for a home loan with $20,000 in escrow for a down payment.

“I would have never had the inspiration or means to do all of this without your help,” Dawn told LeAna and West Central.